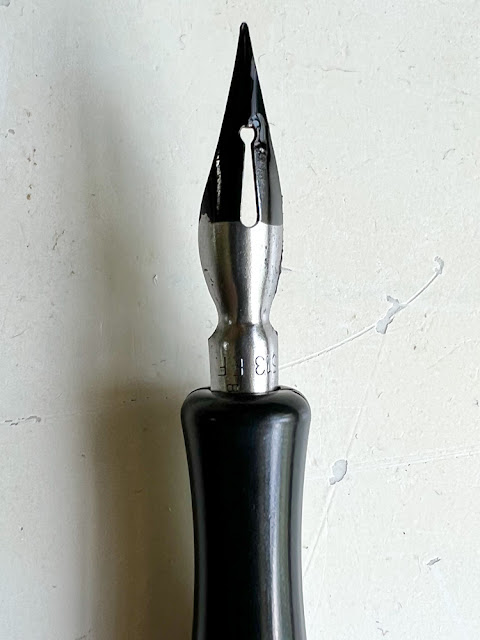 For this one I’ve returned to cross-hatching ink on paper, a style I’m really starting to love. Not only does it produce great results – very much akin to the marginalia that spawned the whole project decades ago – but all those repetitive lines are sort of a meditative experience.

And speaking of those old notebook doodles, this time I added something I used to do all the time but haven’t yet tried in the Leaf Ghost series: a drop shadow. Just a slender line along the bottom edges of the leaf.

While trying to avoid turning this into a De Stijl debate about diagonal lines, I should note that this represents a philosophical departure from previous entries. Up until now all the ghosts have been 5x7 grids of squares subdivided by hues and brightness levels. The combination of these separate blocks of light and color create the illusion of a leaf.

The shadow stands apart from the grid, spanning the underlying shapes as uninterrupted lines. The result looks much more like a physically real leaf, though of course that too is an artistic illusion. Now rather than an transparency lying directly on the background, it hovers above the surface. And the transparency now seems like a lie. Instead of seeing the background tinted through the leaf, we see the surface of the leaf itself that just happens to coincide with what’s behind it.

I’m bothered by the resulting loss of “ghostliness.” But I really love the change it makes in how it looks. As this is only the ninth entry in the project, I imagine I’ll do some more with and without the shadow before I settle on one approach or the other. But it wouldn’t surprise me to see the new element become a staple of the series. And before I tried it, that actually would have surprised me.

I returned to the mixed media paper I’ve used for most of the ghosts. The pen is a Speedball 513EF. This time the background color is Winsor and Newton Black Indian Ink. 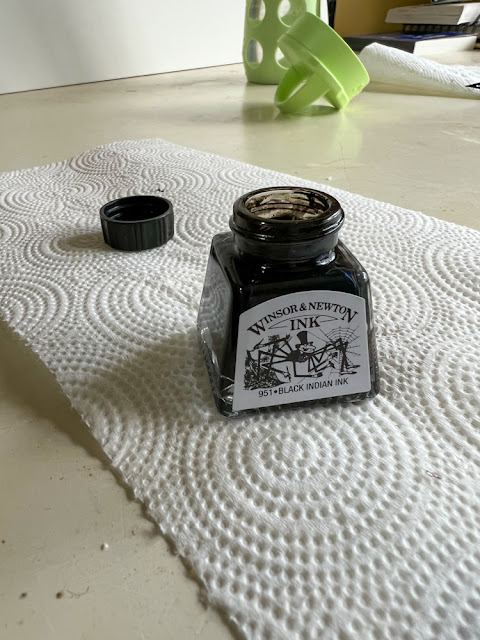 After the pencil work was done, I started with the shadows: 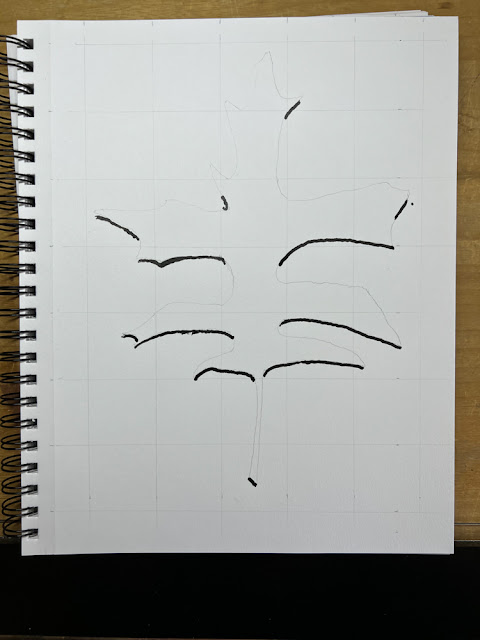 And then added the background: 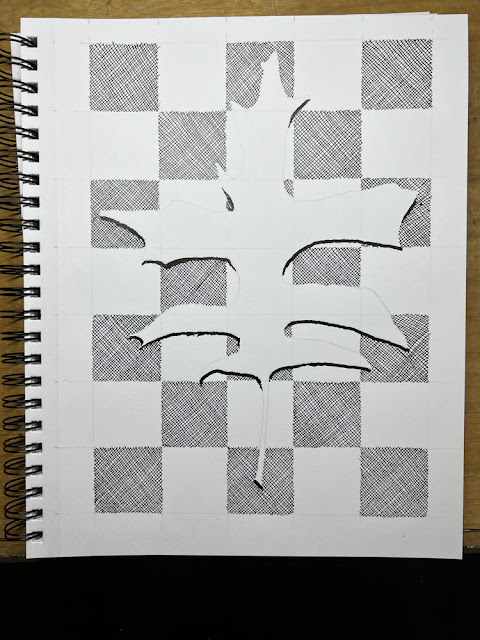 I was briefly tempted to stop at this point, because the negative space makes such an interesting leaf all by itself. Perhaps a future drawing will cut off without a foreground. 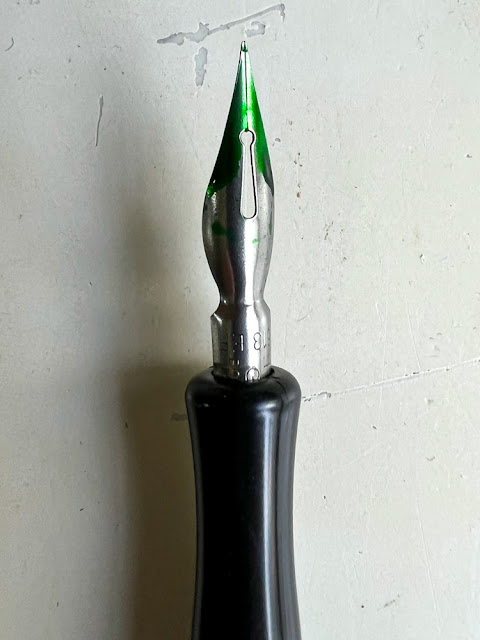 The foreground is Winsor and Newton Brilliant Green. 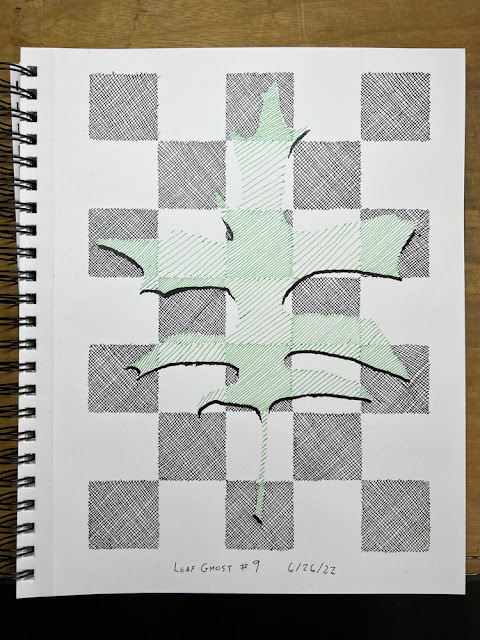 Posted by Bryan Whitehead at 8:36 PM No comments: 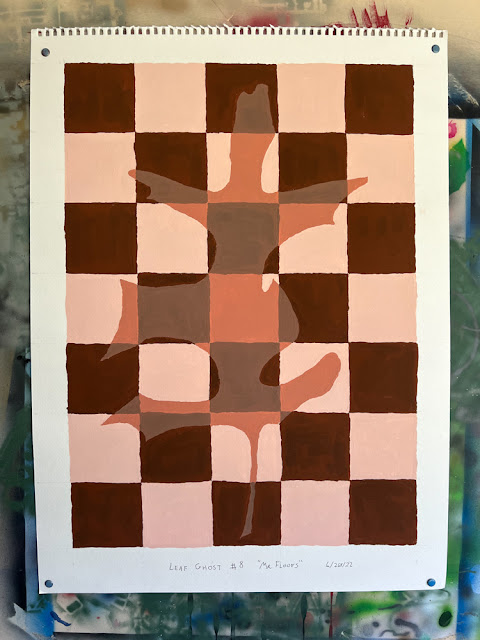 This is the first leaf ghost that has a name: Mr. Floofs. It’s named after one of the stray cats that we’ve been feeding for awhile now. I took the photo of this leaf on my way from the college to my car a few months ago, and when I got home I learned that Mr. Floofs had passed away. So I knew that when I got around to painting this that I wanted it to be in memory of him.

So I started with a photo of him in his younger years: 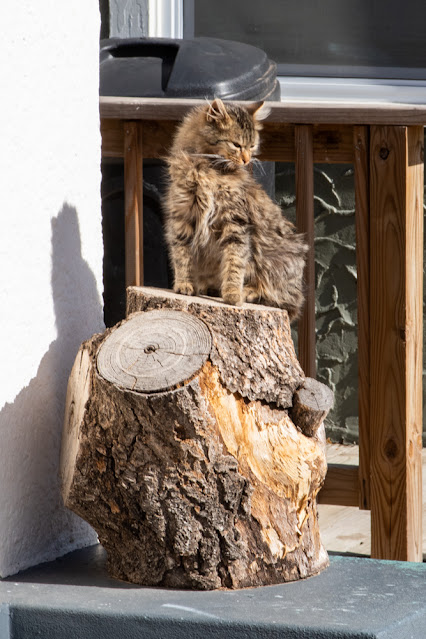 And I used the Capture app to create a color palette based on the highlights, midtones and dark spots in his fur:

I’ve done this dozens of times for digital work. For example, the hues in this coloring book picture began life in a photo of an iguana. But this is the first time I’ve generated a palette digitally and then tried to duplicate it in actual paint.

Clearly my mixing skills are a little rusty. In addition to not getting the colors just so, I tended to mix either too much or not enough. And it seemed to come out either too thick or too thin.

That notwithstanding, I’m pleased with the result. This is the first time in quite awhile that I’ve worked on something so large I had to dig my large easel out of the basement. Gouache was a lot more comfortable to work with on this scale than it is on sketchbook pages, so I will definitely be back to larger watercolor paper like this or maybe even illustration board in the future.

Posted by Bryan Whitehead at 4:12 PM No comments: 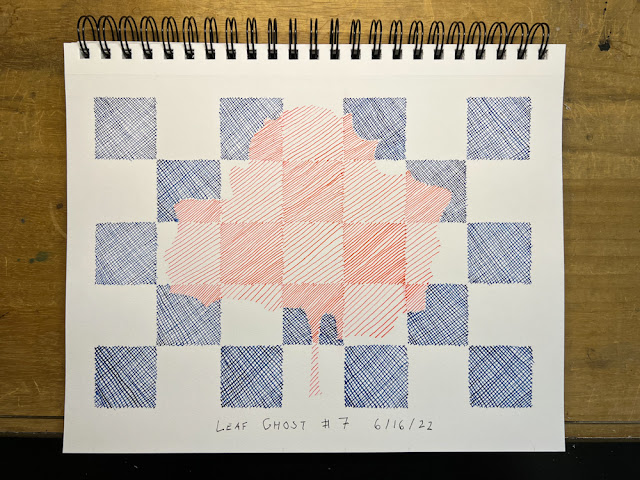 This one represents a handful of firsts.

To begin with, it’s the first horizontal layout leaf ghost. The type of leaf also differs from the first six.

I’ve been playing around with dip pen nibs, and this is the first time I’ve used them for a leaf ghost. I used a couple of Speedball 56 Standard School nibs, though honestly cleanup is so easy that I could have stuck with one.

The company that makes them describes this model as good for beginners, which is definitely what I am at this point. The differing line weights are the result of experiments with different angles, pressures and times between returning to the ink bottle for a fresh dip.

Speaking of ink, that actually isn’t new. It’s the same two colors I used for Leaf Ghost #3, for which I used a brush rather than a pen. Particularly for the carmine, the color is so different that it doesn’t even look like the same stuff. I think it looks better here, certainly more in keeping with what the manufacturer had in mind.

This is also my first time erasing the underdrawing. Especially with the gouache pieces, most of the pencil ended up covered anyway. But here the ink needed to stand alone without support from visible lines literally defining the edges.

And best of all, this is the first one I’m really happy with. It’s not that I disliked the first six. But this one really came closest to what I had in mind when I started both the overall project and the specific piece. I’m having great fun with the whole dip pen experience, and I will definitely be doing more leaf ghosts this way in the future.

Posted by Bryan Whitehead at 4:19 AM No comments: 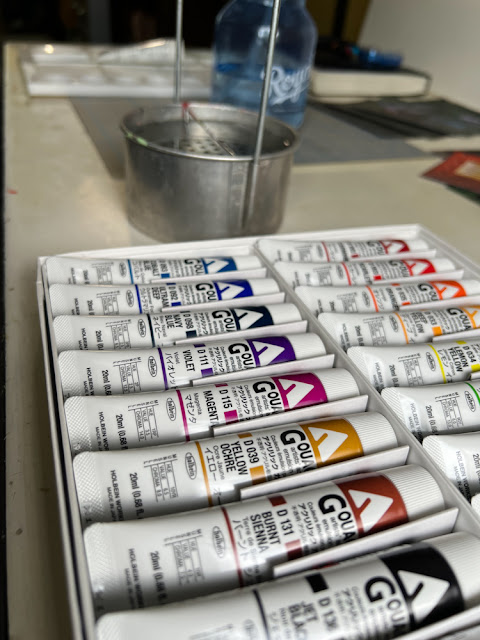 Today’s leaf ghost was back to gouache again. I got a set of gouache colors from Holbein to facilitate getting more experimental with colors, having burnt sienna on hand for an upcoming leaf ghost, and maybe even branching out into some other painting projects on down the line.

This one was based on a photo of a leaf that was soaking wet on a rainy day. To capture the spirit of wetness, I decided to do my first monochromatic entry in the series. 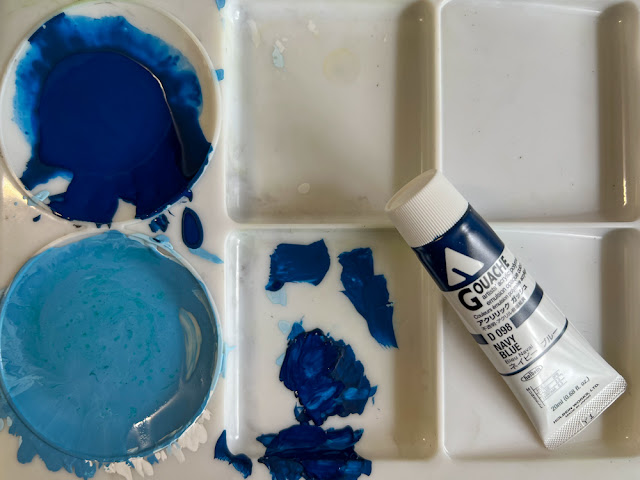 I used titanium white and navy blue for the two extremes, with two mixtures of the colors for the mid tones. I was surprised to see that navy blue appears to have some green in it.

Everything went well until I put too much water in the pure navy for the last pass. I ended up squeezing some more undiluted paint into the tray to get the mix I was after.

I’m still not 100% comfortable with paint, but then this is only my second time in recent memory even trying to use it. So I’ll keep practicing. 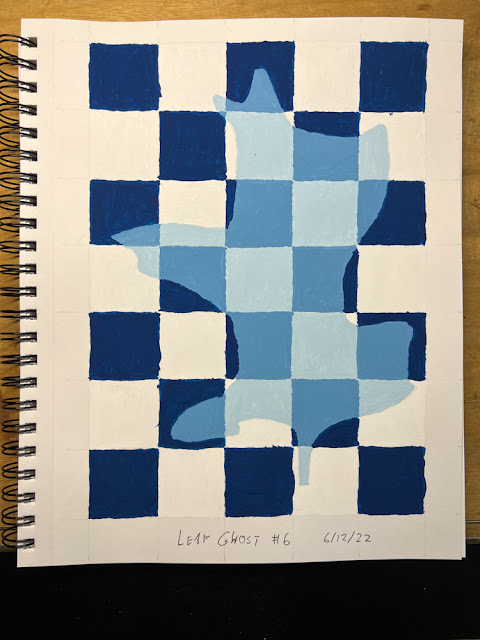 Posted by Bryan Whitehead at 8:41 PM No comments: 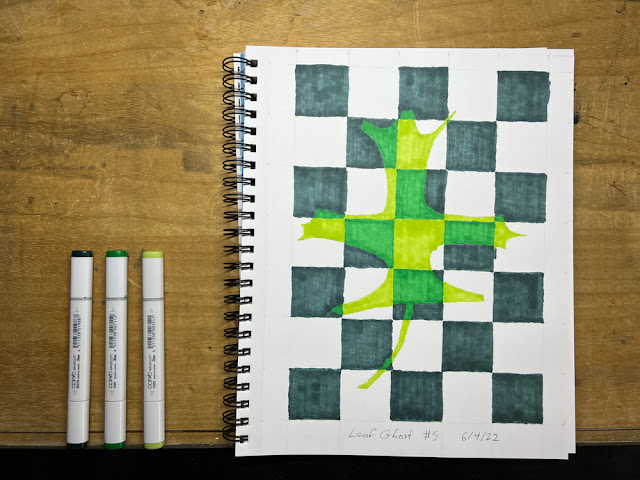 With my art space no longer in use as dead storage for a project in another room, I’ve gotten back to work on leaf ghosts.

The medium of choice this time around was Copic markers on mixed media paper. Like my last use of markers (#1), the ink distribution was somewhat uneven. But this time around I managed more of a regular pattern and less of a chaotic mess. The result has an interesting texture.

Despite the thicker paper, the ink spread a bit and bled straight through to the other side. No big deal here, but I won’t want to use these for anything that needs to be double sided. 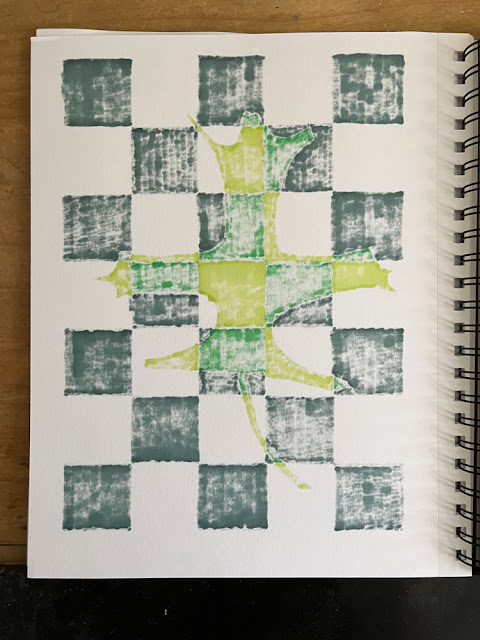 Posted by Bryan Whitehead at 8:19 PM No comments: 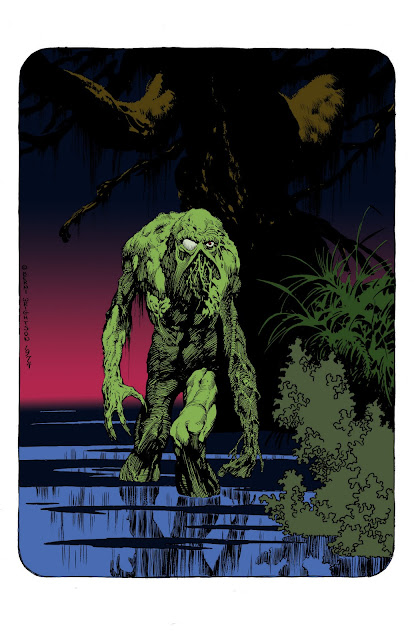 I resisted the temptation to do this entirely in greens, instead opting for a triadic complement color scheme. The result reminds me of the black light posters in the back of Spencers Gifts back in the late 70s.

Posted by Bryan Whitehead at 8:02 PM No comments: 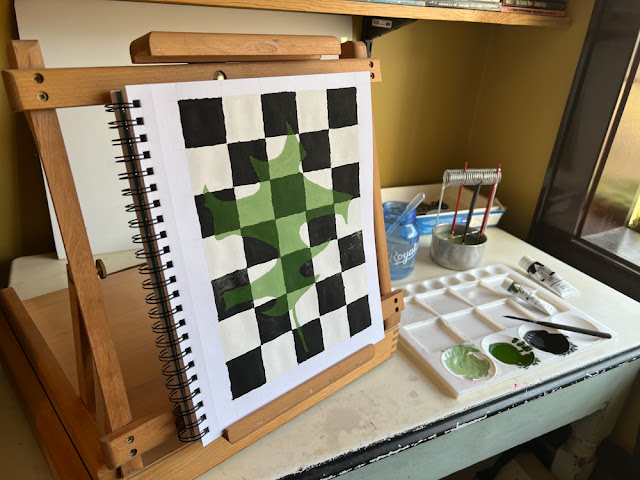 With spring break winding down and leaving me desperate for a creative win, I decided another leaf ghost would do the trick nicely.

This is actually the leaf ghost I had in mind when I first started the series. 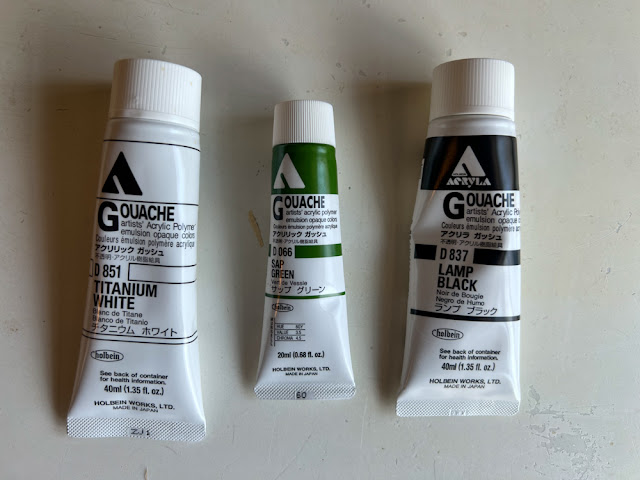 More than two years ago I bought the gouache I intended to use for my first leaf ghost painting. I did some work with gouache as an undergrad many, many years ago, but I hadn’t touched the stuff since. I remembered that it tended to produce a nice, flat, even color coverage, which is exactly what I had in mind.

It turned out that the black was the only color of the three that produced the effect I remembered. Which is okay. I’m still using this project as an excuse to experiment around with media and techniques, so this is anything but a failure. 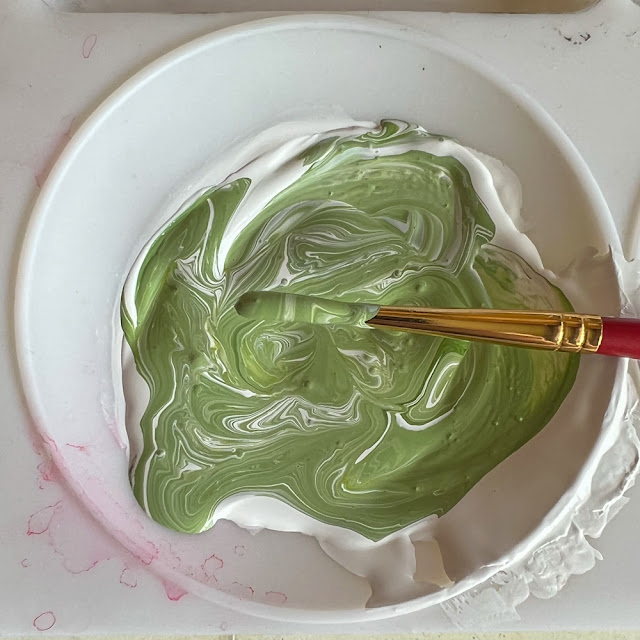 Naturally I mixed white and the darker green to get the lighter green.

And speaking of white, this is the first time I painted the light parts of the background squares rather than letting the white paper do the work.

Oh, and this was the first time I ever got paint on this old easel I’ve had for years. 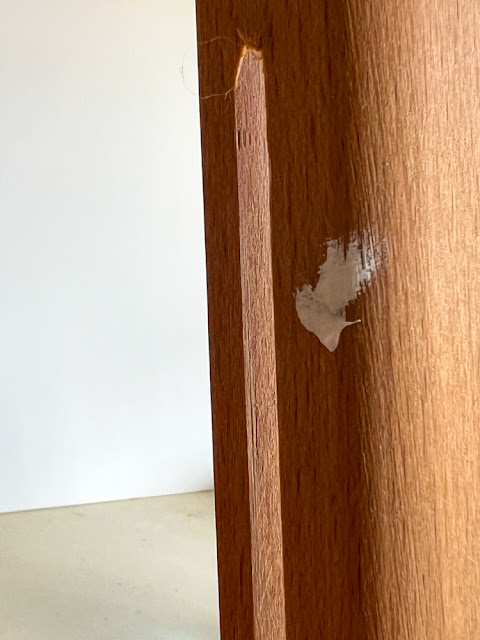 One of my friends from art school would go absolutely nuts if she saw that photo. She was super strict about making sure everything was completely spotless before beginning and after finishing any art project. I agree about the importance of cleaning pens, brushes and anything else where old media might mix in and damage a future project. But for a support like an easel, this strikes me more as a piece of its history.

Overall I was pleased with the results this time around. At some point in the future I will return to this combination, probably for a larger piece on either paper or illustration board. 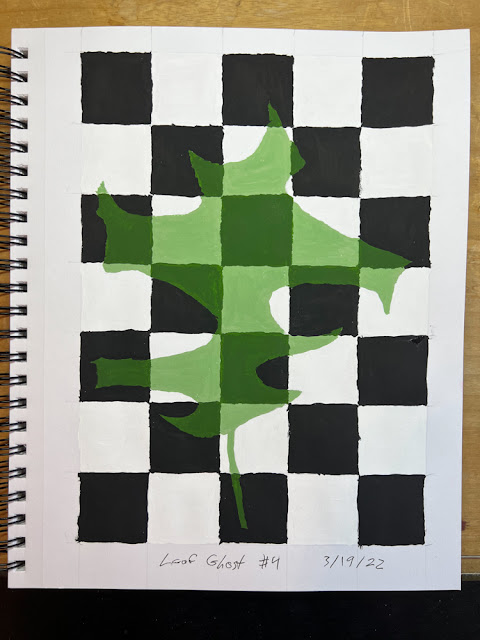 Posted by Bryan Whitehead at 9:32 PM No comments: